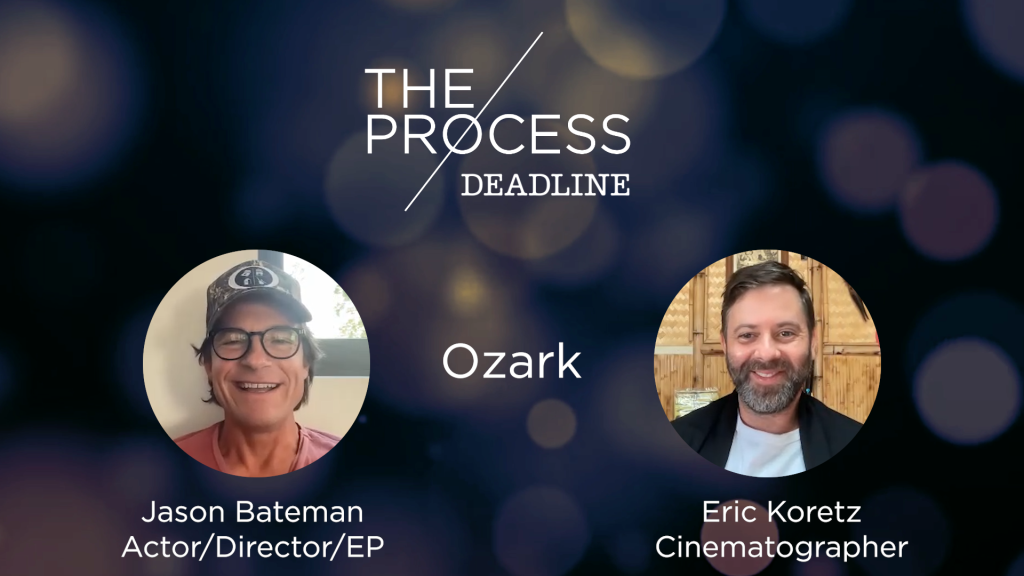 As the director, executive producer and star of Netflix’s Emmy-winning crime drama Ozark, Jason Bateman looked to create a work of “detail and precision,” marked by “an economy” of visual communication—one that would lean into and repeatedly pull off his most “complicated idea or desire.”

Coming into the series’ fold at a late stage to lens four episodes including the Bateman-directed series finale “A Hard Way to Go”—following years of legwork on the part of its creative team, in establishing and evolving its look—was cinematographer Eric Koretz, who was immediately taken with the collaborative environment on the show. “Obviously, I came in halfway through for the second part [of the final season], and it was apparent to me right away that you built this culture on set that’s about achieving greatness over good,” Koretz tells Bateman in the latest edition of Deadline’s video series, The Process. “And everyone is so involved in the process. No one takes a minute off to f**k around, and it’s really just about, can we make this better?”

Koretz recently landed his first Emmy nomination for his work on Ozark, with Bateman landing three for Outstanding Drama Series, Directing and Lead Actor. For the uninitiated, the series centers on Wendy (Laura Linney) and Marty Byrde (Bateman), a married couple who are forced to move their family to the Ozarks, when a money-laundering scheme goes awry. The series follows their journey from their normal, suburban Chicago life to their dangerous criminal enterprise in Missouri, and their efforts to take full control of it — exploring capitalism, family dynamics, and survival through the eyes of (anything but) ordinary Americans.

Bateman says that the culture he looked to cultivate on Ozark was one where “everybody is plus-ing and adding to” the work of those surrounding them. “I think that’s the only way you can get from good to great. Everyone’s reaching for great, and you can probably get good fairly easily if writing is fantastic, performance is fantastic and a crew is credentialed,” he says. “But people, when you’ve got some ownership, a little bit of skin in the game, you feel included, then you start giving the stuff that can really take things to the next level. And we were both lucky to be working with people that know exactly how to do that.”

Bateman admits that it could potentially be “frustrating” for an artist like Koretz to come onto a project like Ozark in its final chapter, given the fact that its world had long ago been established, and the DP would be working alongside creatives like himself, with “very clear ideas” of what they wanted to accomplish. Still, he adds, this was certainly never an issue with Koretz. “You never bristled at me suggesting we do it in a way that maybe you hadn’t been thinking. You were always comfortable with it,” says Bateman. “It seemed like it was because you were confident in your ability to hear an idea and find a way to get behind it and make it your own, as well.”

Koretz notes that as a cinematographer, his goal is to come onto a project “egoless,” and to “support the director’s vision” however he can. “I just want to make the best picture possible, so it’s always a discussion. Then, if I have an idea that I think could shape it, I’ll chime in, or I’ll add whatever element I can to make it a better shot, a better scene, a better episode,” the DP tells Bateman. “Directors like you are very specific, have a great vision of what they want to see, even before they get on set, and at that point it’s about augmenting. Can you add a little bit here? Can this camera change a little bit here? Can the lighting come in here and really accentuate what you’re talking about? So, I try to do it seamlessly without imposing my will.”

In conversation with Bateman on The Process, Koretz discusses his longtime draw to dark dramas like Ozark and Bateman’s “meticulous” approach to directing, as well as his early interest in composition and work in graphic design, his start in cinematography at AFI, his love of on-the-day changes on set, how his work on documentaries has influenced his approach to narrative projects, and more.

Bateman for his part speaks to the thought that went into developing Ozark‘s “uncomfortable” visual language, the importance in projects he takes on of “the camera being a performer,” the thought that went into bringing Ozark‘s story to a close, his approach to helming series finale “A Hard Way to Go,” and how he’ll move between comedy and drama as he goes forward in his career.

Additional topics touched on by Bateman, in his chat with Koretz about the art of “making fake life,” include his initial plans to attend AFI’s directors program in his 20s, which were derailed by acting work, lessons taken from his filmmaker father Kent Bateman, what initially excited him about the prospect of directing and his first job doing so on a multi-camera comedy, his ease in directing and acting at the same time given his start in the latter as a child, his philosophy when it comes to collaboration, and “the difference between ‘better’ and ‘different.’”