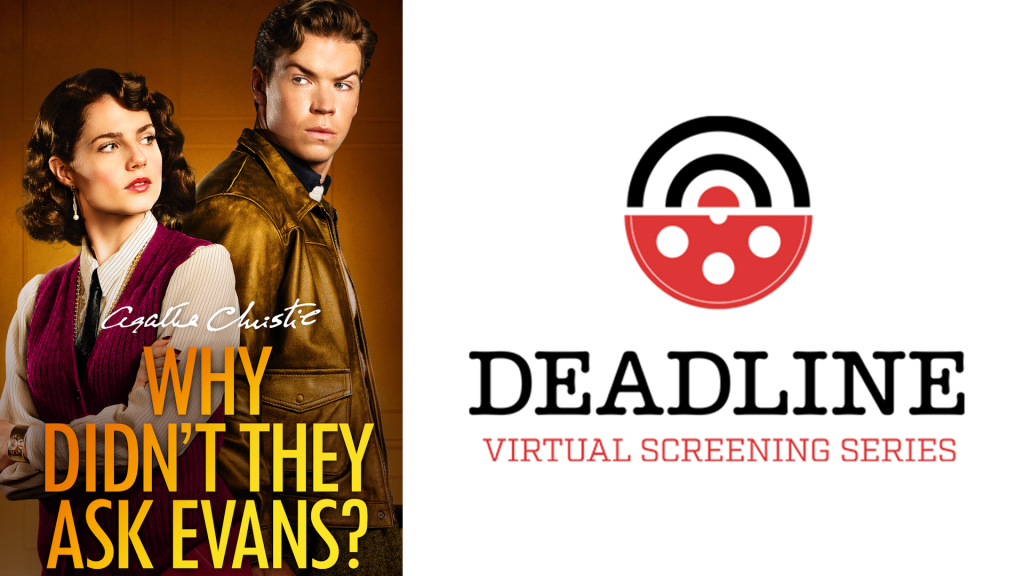 Hugh Laurie is of course well known as a multi-Emmy-nominated actor, notably in long-running series House among other things. But he also is an increasingly accomplished force behind the camera too, and demonstrates that again in a new take on Agatha Christie’s Why Didn’t They Ask Evans? for which he wrote the screenplay, directed, executive produced and even appears as Dr. Nicholson. The Britbox show stars Will Poulter and Lucy Boynton and is full of the kind of things Christie fans flock towards; even if it is not as well known as say the Hercule Poirot books, it is still an example of why Christie never goes out of style.

Based on the iconic 1934 Christie novel, this limited-run mystery follows the local Vicar’s son Bobby Jones (Poulter) and his whip-smart friend, socialite Lady Frances “Frankie” Derwent (Boynton) on their crime-solving adventure after they discover the crumpled body of a dying man who, with his last breath, gasps the cryptic question of the title. Armed only with a photograph of a young woman found in the dead man’s pocket, the amateur detectives pursue, and are pursued by, the answer to the mystery.

Laurie and Boynton joined me for a screening at Deadline’s Virtual Screening Series on Tuesday night which was followed by a conversation that you can watch in the video above. Laurie explained why he warmed to the challenge of making this compelling entertainment for a new generation.

“I didn’t fully appreciate how much of a challenge it would be. I was just motivated by a sort of almost childish enthusiasm for the story, for the character that Lucy plays, for the devious puzzle at the center of the novel, and just the world of it. The world that Agatha Christie created, I think…I happen to think that this novel is unusual. Well, it’s unique, I think, in as much as the novel has a sort of lighter, comic spirit to it,” he said. “I don’t particularly detect as much in the Poirot stories, which were immensely successful, up to the point when she wrote this in 1934, and it must’ve baffled her…her publisher and her agent must’ve been tearing their hair out when she said I don’t want to do another Poirot. I’m going to leave that and do this, but I absolutely love the story for that reason. Actually, I think there’s something hip about it. I think it’s they’re hip characters, and it’s a hip story.”

Laurie also talked about the difficulty of actually taking this out to locations all over England and Wales, a rather herculean task for the crew to be sure, but right for the project.

“Well, I think it added greatly to the story. I think it’s one of the…the movement of the story is very much a part of the atmosphere of it. They are actually…these two characters are following a trail, and they are literally following a trail. They’re actually going A, B, C, D, and going from place to place. Logistically, practically speaking, it made it an incredibly challenging thing to do because almost every day, we were moving location, and that’s incredibly hard on everybody,” he said. “They’ve got to set everything up every single day in a new place. I have absolutely no empathy at all for people working under me, so I didn’t care about that, but it did make it very hard for them, but whereas if, obviously, you’re making a single story in a single location, you know, you could settle down. You could park the gear. You know where everything is. You know, you have everything to hand. Whereas we were very much a traveling circus, which was…as I said, it was good and bad. It was hard to do, but I think good for the story.”

As for Boynton, who has a choice role in the project, she was particularly excited to work with Laurie and says being directed by someone who is also an actor is a plus.

“I think it kind of changes the way that you communicate about the project as a whole, but especially the characters, and what I loved was how much Hugh loves these characters, and so, immediately, you feel in safer hands because there’s this care and consideration for the accuracy of the portrayal, but also making sure that life and electricity that is so present in the character is constantly being brought, day to day, to each scene. And so knowing that that is being protected kind of allows you, as the actor, I think greater freedom to play within that,” she said. “And it changes the dynamic, as well, in that I think speaking to another actor, you kind of end up going from the inside out of a sense. So, rather than having the kind of external perspective that a director does of the entire tapestry, there is that, but also this intimate understanding of the way that you find a character in each moment in the scene, and that’s very much from the emotional core of them. So, to know that that was being covered was also, yeah, safe hands, but it was a lot of fun.”

Check out the interview in the video above. Why Didn’t They Ask Evans? is now streaming on Britbox.