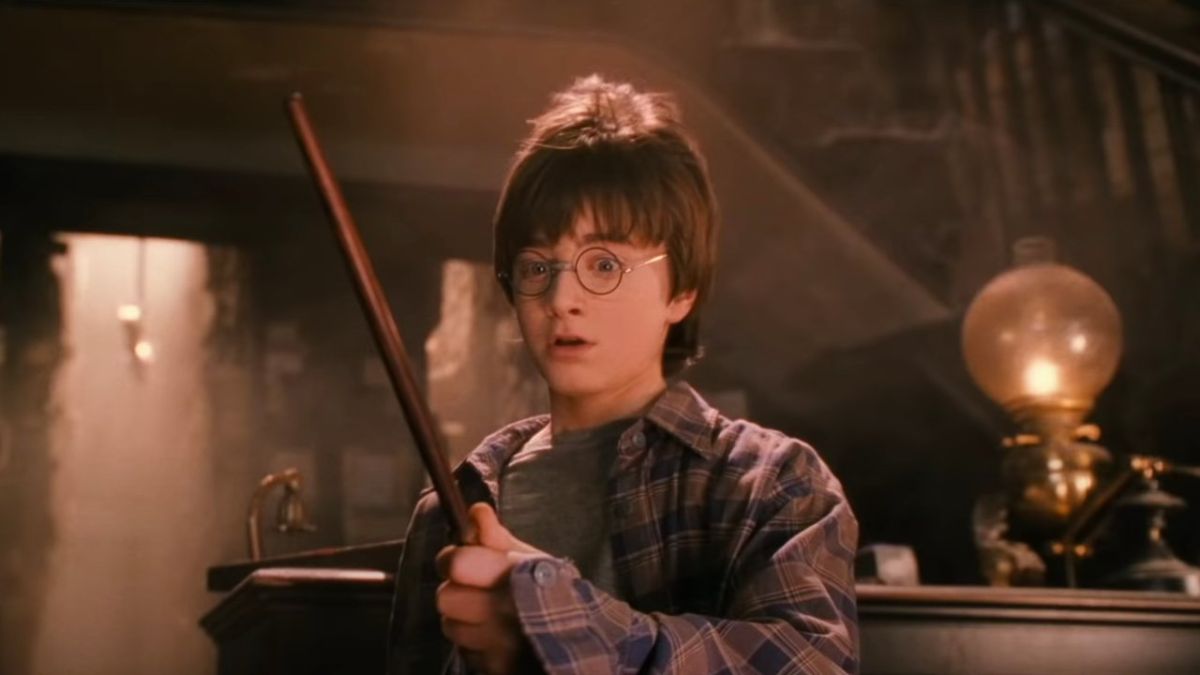 Daniel Radcliffe, Rupert Grint, and Emma Watson became instant stars because of the Harry Potter movies. These films broke box office records, received many award accolades, and left their mark on pop culture forever. I, like many, grew up reading the Harry Potter books, and then spent years watching, and criticizing, the movies. I also have gotten into the Fantastic Beasts series (insert head shakes of disapproval here). A great thing about the Harry Potter books and movies is their timelessness. Constantly, new people discover and fall in love with them. For those new to the world of Harry, this one’s for you: a list of all the Harry Potter movies in order of their release, including the Fantastic Beast movies.

These films aren’t placed in order of actual events, because who cares about accuracy, but in order of theatrical release. If you’re new to the series, you’ll want to watch them in this order the first time through…

Harry Potter And The Sorcerer’s Stone (2001)

Harry Potter and the Sorcerer’s Stone (also known as Harry Potter and the Philosopher’s Stone) introduced everyone to the world of Harry Potter (Daniel Radcliffe). We meet 11-year-old Harry as he discovers that he is not just a neglected child, but a wizard. He then travels to Hogwarts where he meets his soon-to-be best friends forever, Hermione (Emma Watson) and Ron (Rupert Grint).

Quickly, our hero is tested when he learns that dark forces reside in Hogwarts trying to bring back He-Who-Must-Not-Be-Named (or, for those brave souls, Lord Voldemort). Chris Columbus directs this Harry Potter movie and really does a fantastic job of bringing new and old fans of the characters into this world. If this first film wasn’t so well received, who knows if the franchise would have gained as much success as it did. Harry Potter and the Sorcerer’s Stone really set the films up for potential success.

Harry Potter And The Chamber Of Secrets (2002)

Chris Columbus, and most of the main cast and crew (save Emma Watson for one key scene), return to bring Harry Potter and the Chamber of Secrets to the big screen. Ron, Hermione, and Harry return to Hogwarts a little older, a little wiser, and just as rule-breaking. This time Harry finds a mysterious diary from a former Hogwarts student named Tom Riddle (Christian Coulson). Nothing weird or sketchy could be associated with this strange diary, right? Wrong! It leads Harry and his friends to more danger and mischief.

If you weren’t already in love with the Harry Potter series, then Chris Columbus continues to develop, form, and enhance the world of Harry Potter and his friends on the big screen. By Harry Potter and the Chamber of Secrets this magical world feels established and grounded.

Harry Potter And The Prisoner Of Azkaban (2004)

It’s Year 3 and the mysteries and danger are even greater in Harry Potter and the Prisoner of Azkaban. Alfonso Cuaron steps in to direct this film that has Harry Potter going deeper into his parents’ past. He learns that Sirius Black (Gary Oldman), a criminal and presumed Voldemort supporter, escapes from Azkaban. Harry believes that Sirius is hunting him down with plans to kill him.

Before the release of Harry Potter and the Half-Blood Prince, this was my absolute favorite book of the series. Therefore, I came in with high expectations. For the most part, Alfonso Cuaron did an amazing job directing this film. It’s probably one of the best Harry Potter movies.

Once upon a time, Robert Pattinson wasn’t Batman. Instead he was having his glory stolen from him by Harry Potter as Cedric Diggory in Harry Potter and the Goblet of Fire. It’s time for the Triwizard Tournament and three magical schools are competing, with one 17-year-old representative from each school participating, but 14-year-old Harry is selected along with Cedric to represent Hogwarts. This creates a big scandal and, of course, leads to danger and attempts to kill Harry Potter.

Hands down, this was one of the most exciting books to read for all the puzzles and riddles that needed solving for Harry to advance. Going into this film, this could either be a make or break moment for the film series. Mike Newell does an excellent job of adding the drama and thrills that Goblet of Fire needed to really push the franchise forward. This is also the first film where we meet a fully formed Voldemort, played by Ralph Fiennes.

Harry Potter And The Order Of The Phoenix (2007)

We witness a darker, more cynical Harry in Harry Potter and the Order of The Phoenix, in which our hero forms a secret group known as Dumbledore’s Army to practice defense spells. Also in this movie, the first in the series directed by David Yates, Harry and long time crush Cho Chang (Katie Leung) explore their feelings for each other and we meet Dolores Umbridge (Imelda Staunton), who is easily one of the worst villains in the franchise.

I will apologize in advance to any Harry Potter and the Order of the Phoenix book and movie stans, but to me, of all the books and movies, this always felt like a filler point. It helped forward the story along, but didn’t add anything revolutionary to the series. It was fine. And David Yates did a fine job directing it.

Harry Potter And The Half-Blood Prince (2009)

It’s the sixth year and the big conclusion is drawing near. Harry Potter, Ron, Hermione, and Ron’s sister, Ginny (Bonnie Wright), are now 16 and 15 and full of angst and hormones. When not dealing with various romantic problems, Lord Voldemort and his team have a wicked plan brewing that will change the course of Harry’s world forever.

David Yates returns to direct Harry Potter and the Half-Blood Prince. It focuses a lot more on Harry and his friends being teens than many of the other movies. This film also has some major moments and reveals that set the course for the final two movies. The Half-Blood Prince also has the most shocking moments of the franchise.

The first half of the final story emphasizes a lot of the emotional turmoil that Harry, Ron, and Hermione are now facing as they’re isolated from everyone else, processing their losses over the past six movies, and facing a very dangerous foe. It also takes a more quiet route as it leads up to the big grand conclusion.

It’s all coming to an end as Harry, Ron, Hermione, and company face off against Voldemort one last time. This movie reveals all the secrets that have been hidden for seven films, gives fans the big battle between Harry and Voldemort, and fulfills all leftover prophecies.

Harry Potter and the Deathly Hallows: Part 2 is probably among the best movies of the franchise because it offers a fitting conclusion to the movies and a fairly exciting and emotional adaptation of the book. Harry Potter fans are some of the most diehard, critical, and dedicated out there, and I believe many can agree that David Yates may have fumbled with some of the movies but came through in the end with Deathly Hallows Part 2.

Fantastic Beasts And Where To Find Them (2016)

Set in 1926, Fantastic Beasts and Where to Find Them sees Newt Scamander (Eddie Redmayne) go on an adventure to help an abused and neglected boy named Credence (Ezra Miller), and locate some of his missing creatures. David Yates once again returns to the world of Harry Potter, but this time, way before the events of the first eight films. We meet a bunch of new characters in this one.

Along with Newt, we meet American witches and wizards like Tina (Katherine Waterston) and her sister, Queenie (Alison Sudol), muggle/no-maj baker Jacob (Dan Fogler), and Colin Farrell as  Percival Graves – a wizard detective who is not quite what he seems. Fantastic Beasts and Where to Find Them acts as a way to expand the Potterverse.

Fantastic Beasts: The Crimes Of Grindelwald (2018)

Fantastic Beasts: The Crimes Of Grindelwald is the second in a five movie plan to further flesh out these characters, including the titular villain, revealed to be played by Johnny Depp at the end of the first film. The sequel focuses mainly on Credence, Newt and his family, and scheming by Grindelwald). Jude Law joins the cast as young Dumbledore, too.

If you enjoyed the first Fantastic Beasts movie, you may like this one, too, unless you really don’t like changes to the established canon.

Fantastic Beasts: The Secrets Of Dumbledore (2022)

Picking up where the last film left off, the power and influence of Gellert Grindelwald (this time played by Mads Mikkelsen) continues to rise after acquiring a devoted following that includes Queenie, much to Jacob’s dismay. Thus, the muggle is recruited to help Albus Dumbledore, Newt Scamander, and others to defeat the evil wizard before it is too late.

Franchise veteran David Yates returns to direct part three of this proposed five-part Harry Potter prequel series which moves the story forward in more thrilling ways. Fantastic Beasts: The Secrets of Dumbledore offers new reveals  by the ending that would prove to be a shock for longtime fans of the Wizarding World.

How To Watch The Harry Potter Movies On Streaming

For a while, the Harry Potter movies seemed to change streaming services more often than the staircases at Hogwarts change direction. However, the entire series so far, including the latest Fantastic Beasts movie, currently resides exclusively in the Wizarding World Collection on HBO Max. Of course, the fantasy films are also available as digital rentals or purchases on Amazon.

If you’re looking to check in on what became of Harry, Ron and Hermione in their adult years, check out the stage production, Harry Potter and the Cursed Child. The script for the play is available for purchase (opens in new tab), however, since it’s a play, it’s really meant to be seen on the stage, if you’re able to get to New York or London.