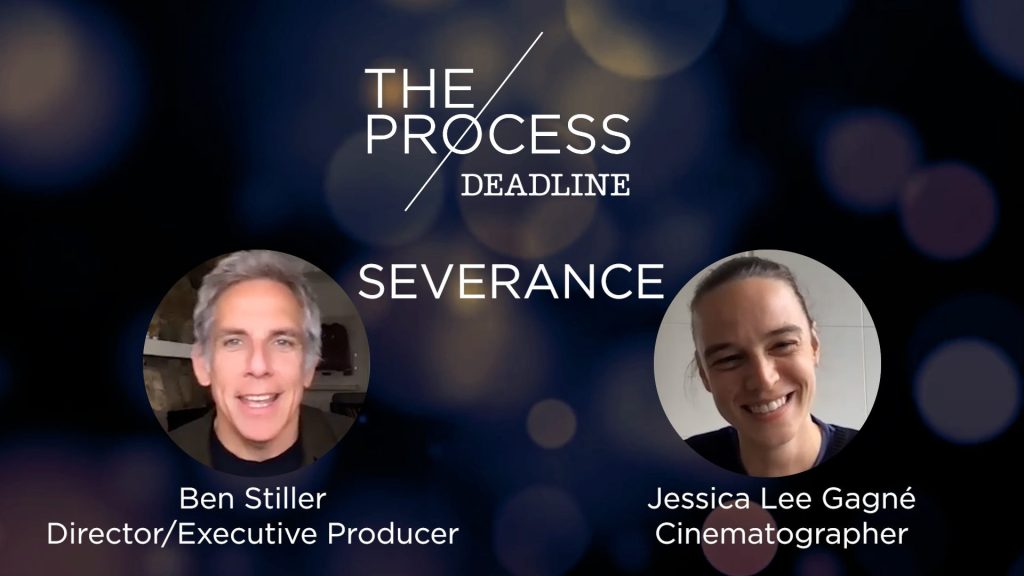 Before meeting Ben Stiller, cinematographer Jessica Lee Gagné was “really reticent” to enter the domain of television, given a “negative idea” she had about the work being done in this sphere.

She says that the work she was interested in doing was more “niche,” “indie” and “fearless” than that she believed she could find on TV. But then Stiller approached her for his acclaimed Showtime limited series Escape at Dannemora, and her entire perspective shifted.

“Working on things like Dannemora…I’ve realized that what you can do in television now is extraordinarily amazing,” Gagné shares, “and when you have the right tools, the right amount of time and the right people around you, you can really create a tour de force kind of thing.”

Gagné’s latest project with Stiller is the equally brilliant series Severance for Apple TV+, which all but defies categorization, by way of genre. The story centers on Mark (Adam Scout), who leads a team of employees at the mysterious Lumon Industries. Like each of his colleagues, he has undergone a procedure called severance, which has surgically divided his memories between his work and personal lives. This daring experiment in “work-life balance” is called into question as Mark finds himself at the center of an unraveling mystery that will force him to confront the true nature of his work… and of himself.

Gagné’s biggest challenges in Season 1 came in developing  “destabilizing imagery” at the heart of the show, alongside director-EP Stiller—one example being the “Zolly” effect indicating the mental transition of workers from their “outie” to their “innie” selfies, on the elevator ride down into Lumon. Making these challenges easier to navigate was the fact that she has worked with Stiller more consistently than anyone else in her career, meaning that the shorthand they share is more developed than that she has with anyone else.

During a recent conversation with Stiller as part of Deadline’s video series The Process, the DP breaks down the work that went into crafting these kinds of effects and other aspects to the show’s language. She also speaks to her experience coming of age inside video stores, key components of her creative process including the creation of mood boards, the New York bookstore she visits while prepping each new project, her penchant for “gritty and dirty” aesthetics, why she considers Stiller to be “extremely impressive as a director”, why she feels that “the director is always right” in the end, no matter how “annoying” that is to say, and more.

Stiller speaks for his part to connecting with Gagné after seeing her work on the indie Sweet Virginia and the “exciting creative relationship” he’s found with the cinematographer since, as well as the organic evolution of projects over time, his and Gagné’s debate over the notion of bringing filmic aesthetics to Severance, Adam Scott’s “technical” brilliance as an actor, the challenge he’s faced in block shooting the series, the visual inspirations behind Episode 7’s “Defiant Jazz” sequence, and breaking from the “grammar established” for Severance in the Season 1 finale, among other topics.

Severance premiered on Apple TV+ in February and was renewed for a second season in April. Watch Stiller’s entire conversation with Gagné above.