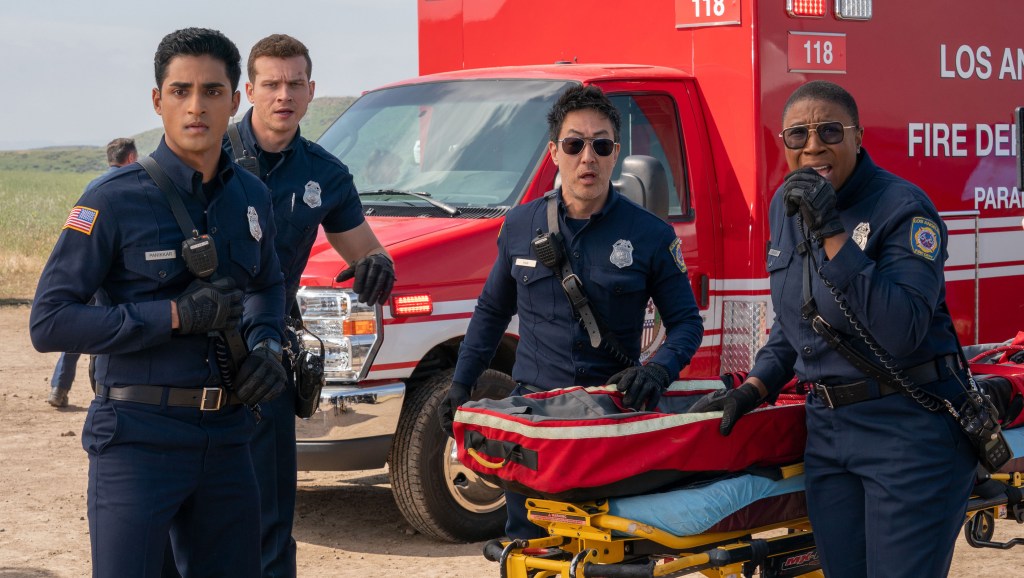 Hot on the heels of Fox’s 9-1-1 sixth season renewal at Upfronts on Monday, the Season 5 finale lined things up for the future perfectly after a night full of anxiety and drama.

Bobby (Peter Krause) recognizes he’s fallen into a dangerous pattern of drinking again and those issues are beginning to affect the family. While busy in the kitchen after an extremely stressful day at work, Bobby shatters a glass in his hand leaving blood all over the place.

His wife Athena’s (Angela Bassett) daughter May (Corinne Massiah) walks into the kitchen just as Bobby is trying to clean up the mess leaving her wondering what’s going on with him.

In another part of town, Maddie (Jennifer Love Hewitt) is meeting up with Chimney (Kenneth Choi) to have an uncomfortably awkward conversation. Maddie wanted to tell Chimney she was ready to get back to work but he assumed the meeting was about her wanting to date other people. He seemed totally relieved after the fact, it’s worth noting.

Hen’s (Aisha Hinds) mom Toni (Marsha Warfield) announces over dinner she’s going to get married and she’d like to have the event in her daughter’s backyard. Hen’s wife Karen (Tracie Thoms) wasn’t as happy as her spouse and was taken aback by the request.

As the story unfolds, Karen reveals she’s not as over Toni not attending her wedding to Hen as she thought she was. Toni did not agree with gay marriage when she opted not to support her daughter when she and Karen first married.

By the end of the episode, Hen and Karen arrive for the backyard celebration only to discover Toni isn’t the person that will walk down the aisle. Mom set it up so her daughter and daughter-in-law would renew their vows in front of family and friends who love them—including Toni who not only attended but officiated.

After handling multiple intense cases, Bobby realizes his drinking has become a problem. While faced with a giant bottle of booze, he dumps it all into the sink. Grateful to be alive, he surprises Athena with tickets for a cruise.

Series executive producer Kristen Reidel broke down the events from the finale and teases what fans could expect to see next season.

DEADLINE: What a great way to close out Season 5 on a high note with that beautiful wedding. Will the celebration bring healing to Toni, Hen, and Karen?

KRISTEN REIDEL: Hen and Karen have been through so much, not just this season but on the show. So this seemed like an opportunity to give them a clean slate so they could reaffirm their commitment to each other and so they can heal that old wound.

DEADLINE: Are there future plans for Toni to walk down that aisle?

REIDEL: I don’t know. One way or another, you’ll definitely see more of Toni. We love Marsha Warfield. We’re so thrilled we were able to get her on the show and to have her play Hen’s mom. They’re just so perfect together.

DEADLINE: Should viewers be worried about Bobby?

REIDEL: I wouldn’t be too worried about Bobby. You know, he’s an alcoholic and he will always be an alcoholic. I think that coming to the brink moment scared Bobby more than it scared the audience. So his decision to take Athena on that honeymoon they never had, is a positive thing. It’s him saying he’s not going to dwell on the bad things that happened and instead embrace the wonderful things he already has.

DEADLINE: When we see them next season, will they be refreshed?

REIDEL: I hope people will be able to see some of their trip! We’re going to have some fun with that vacation. It’s something we’ve been wanting to do for some time which has been talked about on the show. My hope is that at the beginning of Season 6, we’ll see Bobby and Athena on vacation together. However, I will say this is 9-1-1 and you never know what emergencies can arise.

DEADLINE: What can you share about Maddie and Chimney’s future?

REIDEL: With Chimney and Maddie, after having them apart for six months it felt it would be wrong if we had them get back together quickly so we wanted to honor their individual journeys. We did put that little meet cute there in the end, it was our way of saying that, at the end of the day, those two are always going to find their way back to each other.

DEADLINE: Getting back to work was important to her, what can we expect on that front?

REIDEL: We wanted to get her back in L.A. and settled and then feel a pullback into that world. Maddie has always been a person who likes to help others. She was a nurse for many years and then she became a dispatcher. I think there’s a part of Maddie who helps herself by helping others. It’s a good and healthy step for her to be back at work doing a job she loves and is really good at.

DEADLINE: Is it finally over between Buck (Oliver Stark) and Taylor (Megan West)?

REIDEL: Buck’s had an interesting transformation on the show. He was this wreckless guy when we first meet him going from one woman to another. Then he met Abby (Connie Britton) and it made him want to be a better man. In a lot of ways, I think maybe Buck overcorrected a little. So his relationship with Taylor was important because what we needed was for Buck to realize how he feels matters too. He doesn’t need to suck things up all the time to keep a relationship going. It’s ok to say, “This isn’t working for me.”

It was an important step for Buck that this time he wasn’t the guy who got left. He was the guy who decided it was time to end things.

DEADLINE: Abby was the one, right?

REIDEL: We miss Connie. I think she liked doing the season and then she moved on to other things. We would love to have her back if she is ever interested in doing that. I will never say never.