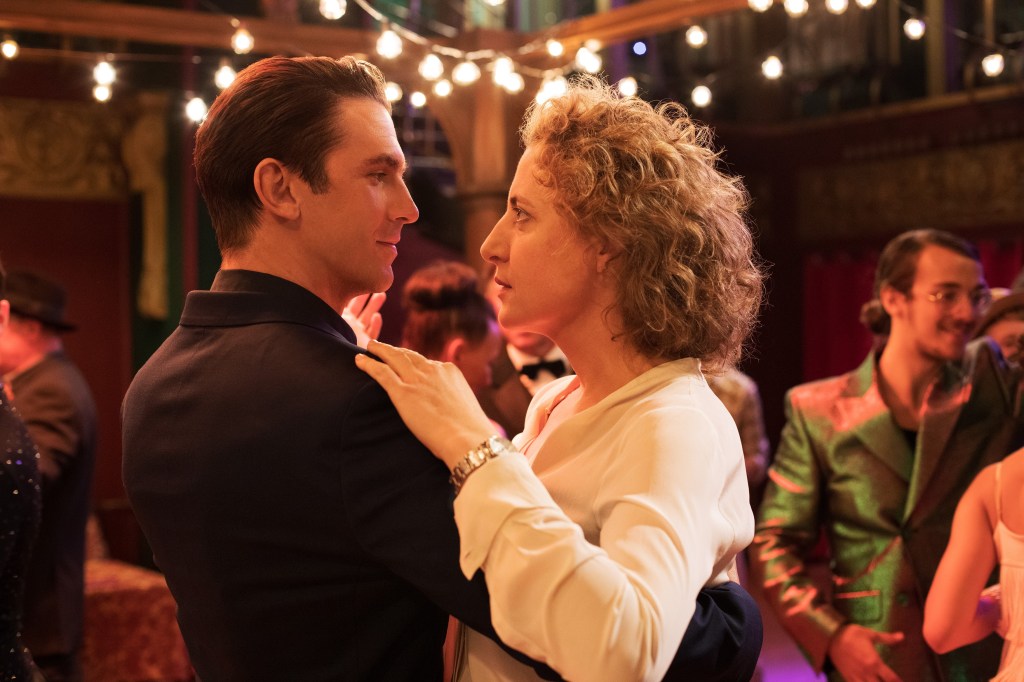 Bleecker Street’s I’m Your Man opens on 12 screens in seven markets, expanding to another 15 next week in a rare platform release banking on strong word of mouth for the well-reviewed, 94% Certified Fresh film that’s Germany’s entry for the 2022 International Feature Oscar race.

Co-star Dan Stevens (Downton Abbey, Eurovision Song Contest: The Story Of Fire Saga) supported the film on social and in a Today show appearance Wednesday. He’ll be at a Q&A at the Landmark in LA on Saturday.

Eggert plays a scientist at the famous Pergamon Museum in Berlin. In order to obtain research funds for her work, she’s persuaded to participate in an extraordinary study: For three weeks, she is to live with a humanoid robot (Stevens) tailored to her character and needs whose artificial intelligence is intended to be the perfect life partner created solely to make her happy.

I’m Your Man opened in Germany July 1. It was produced by Letterbox Filmproduktion in collaboration with SWR, with Lisa Blumenberg producer and Stevens and Schrader exe producers.

Germany’s seen recent success in the International Feature category, last nominated in 2018 with Florian Henckel von Donnersmarck’s Never Look Away and before that with 2016’s Toni Erdmann. It won the Oscar in the category three times, most recently in 2006 with von Donnersmarck’s debut feature The Lives of Others.

Meanwhile, The Eyes of Tammy Faye from Focus Features expands from 450 theatres to over 1,300 in week 2, moving from top 35 markets, including some arthouses, to a full national break all across North America.

The idea, the hope, for specialty film is that an injection of festival fare leading into Oscars season can help waft the market out of its pandemic doldrums where older viewers have been the most hesitant to return to theaters. It’s been touch and go.

“You take it each week as it comes,” said one distribution executive. “But we are bullish on the future, otherwise we wouldn’t be doing this.”

Short windows have been an issue. So has a dearth of high-profile product — pushing some arthouses to play wide releases, from artsier fare to Suicide Squad.

Elsewhere, in specialty, Greenwich Entertainment presents Man in the Field: The Life and Art of Jim Denevan, founder of Outstanding in the Field initiative, a kind of roving restaurant without walls.

Opening in six theatres and on digital, the culinary doc portrays Denevan’s turbulent family dynamic as a youth and the artwork that came of it — both in his geometric land drawings and table-to-farm dinners through OITF. Hosted at one long table with 100 to 1000 guests dining together, Denevan has set tables in vineyards, beaches, meadows, fishing docks, and city streets for over 120,000 patrons in all 50 states and 16 countries.

The official World Premiere event is today, September 24th, in NYC at the Village East by Angelika. A long table will be set at La Plaza Cultural Community Garden.

The Auschwitz Report, Slovakia’s Oscar submission for best international film, tells the true story of two Slovakian Jews who escape Auschwitz in a bid to tell the world about the Nazi atrocities taking place in the concentration camp. Based on the book Escape From Hell by one of the runaways, Alfréd Wetzler, the film has been realized in uncompromising detail by director Peter Bebjak. It pictures the brutal reality of everyday life in the early days of Auschwitz, the sacrifices made to alert allies to the horrors, and the crushing realization that the world was not quite ready to hear about what was taking place behind the barbed wire. Released by Samuel Goldwyn.

FilmRise presents Sundance and Berlin 2020 drama Surge, Skyfall and A Very English Scandal actor Ben Whishaw leads this UK drama about a security guard at Stansted Airport crumbling under the strain of his job and the pressures of a dysfunctional family. A series of frustrations leads him to commit an impulsive act of rebellion that which takes him on an uninhibited journey across the British capital.

It tells the story of a Japanese actress whose wealthy merchant husband witnesses government-approved human experiments on a business trip to Manchuria. A mysterious woman who returns with him from the trip is murdered and life-changing consequences await as the couple plot to smuggle evidence of the atrocities out of Japan to the U.S, chased by the wife’s  childhood friend, now a military policeman.

East of the Mountains opens, directed by S.J. Chiro, written by Thane Swigart with Tom Skeritt in his first leading film role. He plays Ben Givens, a retired heart surgeon and recent widower who learns he has terminal cancer. Determined to navigate his final days on his own terms, he shares the news with no one — not even his daughter (Mira Sorvino) — instead, traveling back to his boyhood home in Eastern Washington with his dog. But the journey does not go as planned; the familiar landscape triggers memories and a connection with a kind stranger (Annie Gonzalez) inspires new insight. From Quiver Distribution, in five theaters and on digital. Based on David Guterson’s best-selling novel.

Vertical Entertainment presents This Is the Year, an indie coming-of-age dramedy that marks the directorial debut of David Henrie. His fellow Wizards of Waverly Place alum Selena Gomez is among the executive producers on the film. Screenplay by Sienna Aquilini, Henrie, Pepe Portillo and Bug Hall is a contemporary take on classic 1980s movies and follows a nerdy high school senior (Lorenzo Henrie) who, in a last-ditch effort to win over the girl of his dreams, embarks on a road trip with his best friends to see their favorite band at the biggest music festival of the year, only to discover true love in the most unexpected place.

Meanwhile, Netflix opens The Guilty in more than 60 theaters (including its own showcase, The Paris in NYC) ahead of an Oct. 1 debut on the streamer. Ethan Hawke, Jake Gyllenhaal, Paul Dano star. A troubled police detective demoted to 911 operator duty (Gyllenhaal) scrambles to save a distressed caller in a film that takes place over the course of a single morning. He soon discovers that nothing is as it seems. Deadline review here.