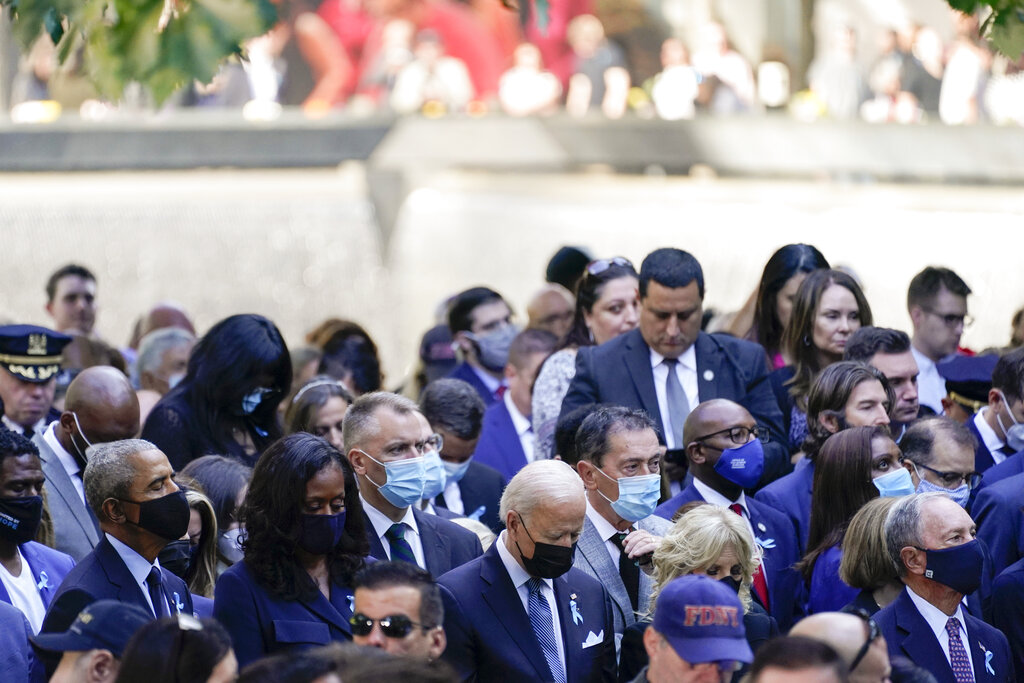 9/11, ABC News, Breaking News, CBS News, CNN, Fox News, Joe Biden, MSNBC, NBC News, News, Politics, Remembering 9/11, Television
Share on Facebook
Share on Twitter
Share on Pinterest
Share on LinkedIn
THIRD UPDATE, 10:53 AM PT:  Former President Donald Trump visited a police station in midtown Manhattan to mark the 20 years that have passed since 9/11.
He was not present at an earlier ceremony at Ground Zero, where Joe Biden and his predecessors Barack Obama and Bill Clinton had gathered. Former President George W. Bush attended and spoke at a ceremony in Shanksville, PA, where there is a memorial to the crew and passengers of Flight 93.
On Fox News, anchor Arthel Neville said that in his visit to the 17th Precinct, Trump “did not miss any opportunities to air grievances including claiming that the election was rigged which it was not. It has been proven in court multiple times. It has been proven that the election was not rigged by elected election officials, but it started out on a good note. Former president saying that he grew up with the firefighters because he’s from New York and he thanked them for their service.”

Biden did not speak at the ceremony, but he of the first lady walked the length of a memorial wall where the names of crew members and passengers are displayed. He later visited the Shanksville Volunteer Fire Department.

UPDATE, 8:05 AM PT: Former President George W. Bush, speaking at a memorial ceremony in Shanksville, PA, recalled the moment of national unity that followed 9/11 and lamented the divisions of today.

“In the weeks and months following the 9/11 attacks, I was proud to lead an amazing, resilient, united people,” he said. “When it comes to uniting America, those days seem distant from our own. Malign force seems at work in our common life, that turns every disagreement into an argument, and every argument into a clash of cultures. So much of our politics has become a naked appeal to anger, fear and resentment. That leaves us worried about our nation and our future together. I come without explanations or solutions. I can only tell you what I have seen. On America’s day of trial and grief, I saw millions of people instinctively grab for a neighbor’s hand, and rally to a cause for one another.”

He also made a veiled reference to the January 6th insurrection at the Capitol, comparing those who engaged in violent acts that day had something in common with the terrorists of 9/11. He said that “we have seen growing evidence that the dangers to our country can come not only across borders but from violence that gathers within. There is little cultural overlap between violent extremists abroad and violent extremists at home, but then there’s disdainful pluralism and their disregard for human life. In their determination to defile national symbols they are children of the same foul spirit and it is our continuing duty to confront them.”

He then paid tribute to “the America I know,” a country of tolerance and embrace of immigrants.

Vice President Kamala Harris also spoke of the need of national unity, telling those gathered that “in a time of outright terror, we turned toward each other. In the face of a stranger, we saw a neighbor and a friend.”

Former President Donald Trump was not president at any of the ceremonies, but he released a video statement largely criticizing President Joe Biden and a statement congratulating former New York Mayor Rudy Giuliani.

He called Giuliani “the greatest Mayor in the history of New York City, for having shown such leadership and doing such an incredible job during and after the attack on our Nation!”

PREVIOUSLY: Family members, survivors, President Joe Biden and some of his predecessors and other figures like musician Bruce Springsteen marked the passage of 20 years since the 9/11 attacks, in moving ceremonies designed to honor memories and strike notes of hope.

Opening a solemn ceremony at Ground Zero, Mike Low, whose daughter, Sarah Elizabeth Low, was a flight attendant on American Airlines Flight 11, the first plane to hit the North Tower.

“It felt like an evil specter had descended on our world but it was also time when many people acted above and beyond the ordinary,” Low said.

Joe Biden and First Lady Jill Biden attended the ceremony for about an hour, but the president did not speak and instead issued a pre-recorded message on Friday. Joining them were former President Barack Obama and Michelle Obama and former President Bill Clinton and former Secretary of State Hillary Clinton. Rudy Giuliani, who was mayor of New York on 9/11, also attended, speaking with the current mayor, Bill de Blasio.

Among the performers were Bruce Springsteen, who sang I’ll See You in My Dreams and Kelli O’Hara, who sang You’ll Never Walk Alone, and along with a piece from Randall Goosby and Zhu Wang. All of the cable networks carried a performance by Hamilton star Chris Jackson.

A bell was wrung to mark the moments when the planes crashed into the World Trade Center as well as when the towers fell, while much of the ceremony was devoted to the reading of the names of those who died on that day by family, who also shared their memories of their loved ones.

Coverage across the networks varied. CBS and ABC largely stayed with the reading of the names, including pictures in the bottom of the screen. Fox News ran a ticker of the names, while the network and other outlets cut in and out of the ceremonies while featuring pre-recorded and live interviews. In Washington, D.C., the local NBC affiliate WRC didn’t carry the network feed or the New York ceremony, instead going to its own local coverage, joining the network at 10 AM.

Former Secretary of State Condoleezza Rice was interviewed by Fox News’ Dana Perino, recounting then-President George W. Bush’s speech the night of 9/11, telling Perino that “he wanted it just to be about reassurance.” She also was interviewed on NBC to talk with Lester Holt, offering her memories of that terrible day 20 years ago, her remorse of the loss of “2,997 souls” on 9/11 and the current situation in Afghanistan.

At the Pentagon ceremony, a bell was wrung to mark the time when the plane struck the complex.

“We the living have a solemn duty to honor their memory, their legacy, to honor and remember them not just today but every day,” said Gen. Mark Milley, the chairman of the Joint Chiefs of Staff, of those who died on 9/11. “Their legacy lives on in the idea that is America,” the increasingly outspoken Chairman stated, calling out international terror groups like the now back in power Taliban and domestic Nazis. And no terrorist, anywhere on Earth, could ever destroy that idea.”

Defense Secretary Lloyd Austin made a distinct point of speaking to the frayed America of 2021 by emphasizing “our core values and the principles enshrined in our Constitution, liberty, rights, the rule of law and a fierce commitment to a government of the people by the people and for the people.”

In Shanksville, PA, where Flight 93 crashed amid a heroic struggle by passengers to prevent the plane from arriving at its intended target, former President George W. Bush and Vice President Kamala Harris were attending a ceremony, and the Bidens were due to arrive later in the morning. The president was then to travel back to the Washington, D.C. area to pay his respects at the Pentagon.